Appointment of John Bateson as Town Crier for Kendal

The Mayor of Kendal, Cllr Alvin Finch and Kendal Town Council are pleased to announce that following the retirement of Richard Mathews, John Bateson has been appointed as his replacement as Town Crier of Kendal.

Richard Mathews has decided to retire following 11 years of service to the Town and Kendal Town Council as the Town Crier of Kendal. Richard’s final engagement was the Mayor Making Ceremony on Thursday 16th May which saw the new Mayor Cllr Alvin Finch take office. At the event Richard was thanked for his contribution and presented with an engraved Cumbrian Crystal goblet. 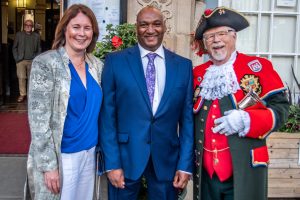 The new Town Crier, John Bateson was born and brought up in Oxenholme. He attended Kirkland Primary and Kendal Grammar School and worked initially in tourism and later as a Senior Hospitality Manager before taking early retirement to care for his mother. John was Mayor of Kendal in 2009-2010 and was a Town Councillor for eight years. He has also served as a Trustee to two local charities and is currently Chair of Kendal Civic Society. He conducts history walks and talks on the subject of Kendal history and is undertaking an advanced internet course on English local history.

The Mayor of Kendal, Cllr Alvin Finch said “I am delighted to welcome John as the new Town Crier. I know he has a wealth of knowledge about Kendal and will I am sure be a great ambassador for the town. I would like to thank Richard on behalf of the Town Council and residents of Kendal for his many years of service and dedication to the role. We wish him a long and happy retirement.” 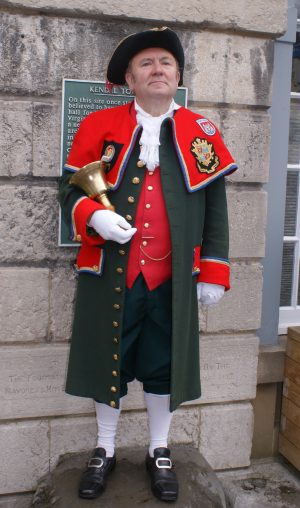 The new Town Crier of Kendal, John Bateson said “I am delighted and honoured to be appointed as Town Crier of Kendal. The position of Town Crier is steeped in our history, and yet works so wonderfully well in a modern setting. It will give me great joy to promote my home town in such a unique and fascinating way. It is my aim to help promote our wonderful town’s cultural heritage, businesses, events and festivals and formal occasions. The retiring Crier, Richard Mathews, has been superb during his tenure and has enhanced the role of Crier to the delight of townsfolk and visitors. I hope to be able to continue his good work for many years to come.”

The retiring Town Crier, Richard Mathews said “I have been very proud to have been Kendal’s Town Crier. It has been a wonderful 11 years and I have been honoured to be involved in so many fabulous community events. I was John Bateson’s Town Crier during his Mayoral year and seeing  how much effort he puts into everything he does, I am sure he will be a great success. I would like to thank the people of Kendal for putting up with me shouting at them for the past 11 years, and especially the young children who were convinced I was a pirate! I shall miss the fun”.