December fundraisers are a resounding success

Many thanks to all of you who joined us for the Mayor’s annual coffee morning which took place on Saturday 21st December at Kendal Town Hall. The event was a roaring success with £449.66 being raised for the Mayor’s Charities. Special thanks go to Kendal Concert Band and Tokari School of Theatre Arts for entertaining us. 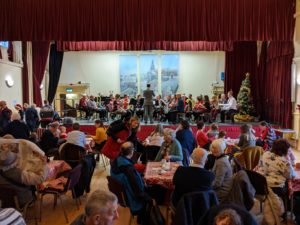 December was a busy month for fundraising as the Mayor held a bag pack at Morrisons in Kendal on the 15th December, raising a further £448.89. We’d like to extend a special thank you to all the volunteers that made the event the success it was.

The Mayor’s Charities are The People’s Café and #TAG (Teenage Arts Group); both organisations continue to do extremely worthwhile work in our community and will make very good use of the additional funds.