Kendal Town Council are delighted to announce that the town has won a Gold Award in Cumbria in Bloom 2019 following judging in July. 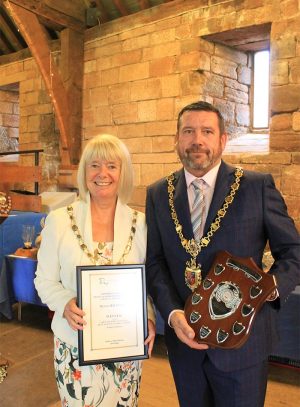 Last Thursday the Mayor of Kendal, Cllr Alvin Finch and the Chair of Kendal in Bloom Committee (KiB), Cllr Andy Blackman attended the Awards Ceremony held at the Tithe Barn, Carlisle. Kendal were awarded a Gold Medal Certificate with a score of 88/100. This follows several years of winning a Silver Gilt Award.

We now await a decision as to whether as a result Kendal will be selected by CiB to represent Cumbria in Britain in Bloom 2020.

Cllr Andy Blackman, Chair of KiB Committee said “I would like to thank the Bloom Committee for its vision and support throughout the year and recognise that our achievements wouldn’t be possible without the unstinting guidance, support and honest endeavours of our officers. Having said that it has and continues to be a town-wide Community effort with support coming from schools, businesses, community groups and other interest groups from around the town. Hopefully we can recognise our gratitude to them all at our annual KiB Awards evening on 19th September.”