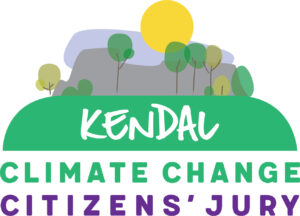 The UK’s first ever Climate Change Citizens Jury at a town level has been a huge success!

To support the next step, the creation of a promotional film, follow this link.

The Jury members are currently writing their recommendations to answer ‘What should Kendal do about Climate Change?’.

We are committed to making sure the time and dedication of the Jury is honoured and results in positive changes in Kendal. The Citizens Jury has brought together both passion and an evidence base through deliberation. We want to ensure that our jurors’ voices are heard.

We want to raise funds to create a short film to promote the Jury’s recommendations and engage the key organisations they call upon for change.

The film will feature:

Kendal Town Council will take the film on a private screening tour to engage the organisations that have committed to responding to the recommendations –  read the commitments here.

Traditionally, Citizens Jury recommendations would be launched at a launch event. We think an adapted virtual approach will create the opportunity for more in-depth conversations and debate. Each committed organisation will be supported to host a screening followed by a Q&A. We will also encourage other Kendal groups to screen and discuss the film. The film will form part of a longer term strategy to take the recommendations forward, including TEDx talks in Kendal on the theme of the recommendations.

By reaching our funding target we will create the opportunity for Jury members to join the private screenings and be part of the discussions. We’ll be able to support the Jury members that need it, both in the form of vouchers and mentoring/coaching, so our diverse group of citizens have equal access.

You can donate here, your donation will support both the creation of the film and the opportunity for jury members to promote and engage with key organisations to influence change.

Kendal Town Council have allocated a further £2000 to fund this next phase of the project to continue the work of the jury and ensure the recommendations have the best possible chance of being actioned.

Crowdfunding success will make a huge difference to both the quality of the film and the extent to which Jury members will continue to be involved, your contribution is much appreciated.

Help us to celebrate the achievement of Kendal’s Citizen Jury.

THANK YOU from all our Jury members and Kendal Town Council.