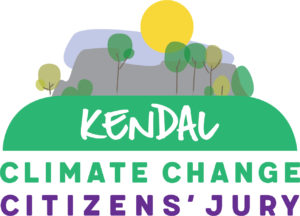 Members of Kendal Climate Change Citizens’ Jury have now been agreed following a four-week recruitment drive with 4,000 letters sent to randomly selected addresses across Kendal and 250 replies received. The twenty strong Jury has been chosen to reflect the diversity of Kendal’s population in terms of age, gender, attitudes to climate change and geography.

Cllr Eamonn Hennessy from Kendal Town Council said: “We have been astounded by the response to the recruitment drive, with registrations of interest coming from all corners of the town and from people of all ages. After so much planning and campaigning to make Kendal the first ever town to host a Citizens Jury on climate change, it feels fantastic to finally have this exciting and innovative process underway.  I for one am looking forward to following the jury’s progress throughout.”

The first of nine sessions start on Thursday (2nd July) when Jury members will get to meet each other for the first time at an online meeting hosted by Shared Future, a not-for-profit social enterprise. The jury members will get to listen to and question a range of expert commentators before creating a set of recommendations which will be presented in October to the Town Council and other key organisations.

Businesses, residents and visitors are encouraged to follow this important and influential group as they debate, discuss and consider the question ‘What should Kendal do about the emergency of climate change?’. A dedicated website – https://www.kendalclimatejury.org/ – is launched this week which will allow members of the public access to recordings of presentations made to the jury by a range of expert commentators throughout the process. The first three experts have been selected to set the context for the jury, but after that the group will steer the sessions and identify the topics they wish to explore in their fortnightly meetings. Details of the jury’s developments will be shared via the website and social media as they evolve throughout the process.  The website also offers information on what a Citizens’ Jury is and how the process has worked in cities around the UK. It will be regularly updated and will record the recommendations made by the Jury after they’ve been presented to Kendal Town Council and partners in October. Following the process, the website will be kept updated with the actions made based on the recommendations.

Cllr Jon Owen from Kendal Town Council said: “The Crowdfunder campaign proved just how important climate change is to Kendal’s community. We urge businesses and residents alike to join us on this journey by keeping up to date with the jury as it progresses. Between now and October we will be sharing commentator presentations, interviews and summaries of jury sessions via our new website and Facebook page. Everyone has a part to play in ensuring the recommendations are responded to, so make sure you stay informed.”

Funding has come from the Town, District and County Councils and 181 local people who contributed to a Crowdfunder campaign which raised over £6,000.