To view the agenda for this meeting, please click on the following link:- https://www.kendaltowncouncil.gov.uk/wp-content/uploads/2013/12/06-02-23-Planning-Committee-Agenda-Pack.pdf

To view the agenda for this meeting, please click on the following link:- https://www.kendaltowncouncil.gov.uk/wp-content/uploads/2013/12/06-02-23-Council-Agenda-Pack.pdf

Kendal’s Unity Festival is a fitting legacy for Guy Tirvengadum’s Mayoral year as it was born out of his theme of ‘Diversity’. The inaugural event took place on June 23rd 2018 with the aim of raising awareness of Diversity and bringing different communities together. The event was a roaring success and has gone on to win Event of the Year at the Diverse Cumbria Awards which took place on May 17th 2019 in Carlisle. Guy would like to thank all the organisers, participants and everyone who attended, helping to make the first ever festival a resounding success. He comments simply, “This award is for us all.” 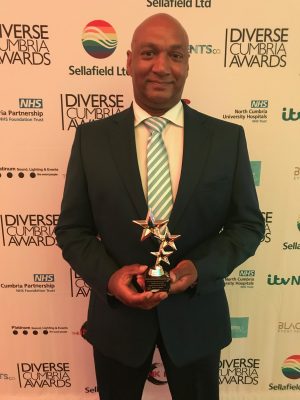 Don’t miss out on the next Kendal Unity Festival which is taking place on June 22nd 2019 at Abbott Hall Park from 10am to 4pm. The event will be opened by the new High Sheriff of Cumbria, Marcia Reid Fotheringham at 10am. There will be numerous stalls and activities like last year and a couple of highlights this year are that John Pye from Smooth Radio will be attending and Kendal’s very own Michelin star chef, Hrishikesh Desai (recently appeared on the Great British Menu) will give an International cooking demonstration at 2.30pm at Abbott Hall social centre.