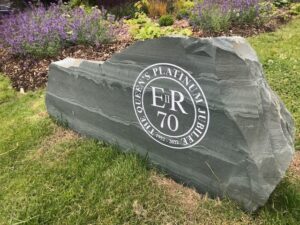 Thanks to the commitment and dedication of various friends groups, allotment holders, local schools, Kendal Civic Society and Kendal Conservation Volunteers; the Town Council co-ordinated a tour of Kendal’s Green Spaces for the ‘Cumbria In Bloom’ judges with resounding success.

The judges were impressed by displays, biodiversity and improvements at our parks including Fletcher, Ford and Nobles, our schools particularly Heron Hill School and our community spaces and gardens such as Rosemary Lane Community Garden, Victorian Fern Garden, Unitarian Chapel and the Fern Planters throughout our town.

The judges commented on the variety and quality of the projects and how they are utilised by residents. To read more about the various community gardens and green initiatives in our town and how the Town Council supports many, please download the ‘Bloom Portfolio’ here or from the Kendal in Bloom page.

Kendal Town Council elected a new Mayor at its Annual Meeting on 16 May. But it was outgoing Mayor Cllr Doug Rathbone who picked up the only nomination, meaning he will serve a second year in office. Supported by Deputy Mayor Cllr Julia Dunlop, also serving a second year, the Mayor was formally ‘made’ at a ceremony in the Town Hall Assembly Room on Thursday 19 May.

There were contested elections in all Kendal Town Council’s wards on 6 May 2022. You can read the results here.

There were also elections for the new ‘shadow’ unitary authority of Westmoland and Furness, which will replace South Lakeland District Council, Eden District Council, Barrow Borough Council and Cumbria County Council on 1 April 2023. You can see the results of that election here.

Cumbria County Council and South lakeland District Council will remain as working authorities until April 2023, with their existing membership serving extended terms of office until then.

You can find out more about how to help support refugees from the war in Ukraine by visiting Cumbria County Council’s website: https://www.cumbria.gov.uk/refugees/. This will post the latest details from government on their sheme for housing refugees and include any specifically Cumbrian initiatives you can be involved with.

Kendal Town Council has filled the vacancies caused by the death of Cllr Michele Miles (Kirkland Ward) and the resignation of Cllr Jon Owen (Strickland Ward).

At a meeting of the Full Council on 6 September, Kath Teasdale was co-opted to fill the Kirkland vacancy.

In a by-election on 23 September, Phil Walker was elected to the Strickland Ward. You can read the formal notice of results here:SKM_C364e21092400290

To register your interest follow this Eventbrite link or email Helen via projectmanager@www.kendaltowncouncil.gov.uk

Kendal’s long-standing Town Crier, Richard Mathews, will be retiring at the Mayor Making Ceremony on 16th May 2019.

Richard became Town Crier in 2008. He immediately threw himself into the role and is often to be seen around Kendal crying in support of festivals and events, as well as at our civic events. He also enjoyed taking part in Town Crier competitions around the UK. He has given invaluable service to the town over the past 11 years and the Town Council is very grateful for all his hard work.

We are now looking for a replacement. So if you enjoy public speaking, have a loud voice and love Kendal then please contact the Town Council for further information.

Richard Mathews said “It has been a privilege and an honour to have been Kendal’s Town Crier for the past few years. I have enjoyed meeting visitors from all over the world. By representing Kendal in competitions I was able to become a part of fellowship of Town Criers worldwide. As well as keeping alive a wonderful tradition, it has been tremendous fun.”

The Mayor of Kendal, Cllr Guy Tirvengadum said “The role of the Town Crier is a very unique and rewarding role that adds great value not only to Kendal Town Council but also to the many events which the Town Crier supports. Richard has done a fantastic job, he will be greatly missed and I am very grateful for his support during my Mayoral year.”

Have you got what it takes to be Kendal’s next Town Crier?

Do you have a loud voice? Do you enjoy speaking in public? Do you love Kendal and have a good knowledge of our wonderful town?

Full livery, expenses and attendance fee provided. There is the opportunity to do private work as well.