The Mayor of Kendal

The feature that distinguishes Kendal from most other Parish Councils in Cumbria is the Mayor’s Parlour. Kendal has had a first Citizen (originally known as the Alderman) since 1575 during the reign of Elizabeth I. The title of Mayor was bestowed by Charles I in 1636 and there have been 273 past holders of the office up to Cllr Alvin Finch, Kendal’s current Mayor for 2020/2021. 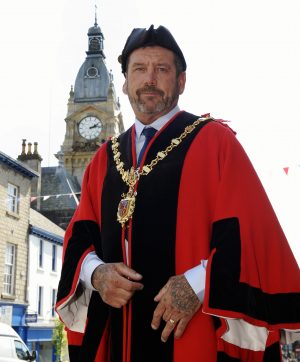 Some of the famous Kendal names which appear on the Mayoral roll of honour include, Bindloss ( for the first time in 1579 and the last in 1894), Sleddall, Birkett, Strickland, Hadwen, Miller, Mackereth, Braithwaite, Dobson, Maude, Bradshaw, Webster (Kendal’s most famous architect), Wakefield, Gilkes and Somervell (of K shoes).

On ceremonial occasions the Mayor, is accompanied by the Sword Bearer and two Mace Bearers. The Sword Bearer carries the sword presented to the town by Charles II, which is one of only 20 ever given to a town by the Monarch. The Mace Bearers (originally known as Sergeants of Mace) carry the maces made in 1647/8.

Councillor Alvin Finch became the Mayor of Kendal at Kendal Town Hall on the 17th of May 2019 and is serving two terms as Mayor due to the Covid-19 pandemic. He has been a Town Councillor for 9 years, representing the community of Kirkland. He has also been a District Councillor for Kendal West for 5 years. He aims to make a difference, support the people and champion active initiatives in the area.

At Kendal Town Council, he is Chair of the Allotments and Mayoralty & Arts Committee. He has a keen interest in Kendal’s heritage and how the town has evolved over the years. Alvin enjoys helping with issues at local level and offering ongoing support to the communities he serves.

The charities Alvin has chosen to support throughout his Mayoral year are Kendal’s People’s Café, an inclusive pay-as-you-feel cafe utilising donated or “rescued” food to help bring the community together, and #TAG, a new group run by Space2Create, aimed at teenagers and designed to use creative activity to boost mood, self-confidence, esteem and build resilience.

The Deputy Mayor for 2020/21 is Councillor Doug Rathbone.

Learn about
The Mayor
of Kendal