To view the agenda for this meeting, please click on the following link:- https://www.kendaltowncouncil.gov.uk/wp-content/uploads/2013/12/06-02-23-Planning-Committee-Agenda-Pack.pdf

To view the agenda for this meeting, please click on the following link:- https://www.kendaltowncouncil.gov.uk/wp-content/uploads/2013/12/06-02-23-Council-Agenda-Pack.pdf

To view the agenda for this meeting, please click on the following link:- https://www.kendaltowncouncil.gov.uk/wp-content/uploads/2013/12/13-02-23-Kendal-in-Bloom-Agenda-Pack.pdf

Plans and Survey Launched to Improve Cycling and Walking in Kendal 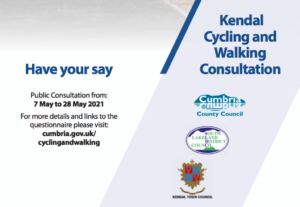 Plans to improve Kendal’s cycling and walking routes have been released by Cumbria County Council in partnership with South Lakeland District Council and Kendal Town Council.

A survey is now open until the 28th of May to find out the following:

Kendal Town Council is supportive of cycling and walking improvements to improve Kendal and address the Climate Emergency by supporting more people to walk and cycle. We are encouraging people to complete the survey to help Cumbria County Council unlock potential funding to action the proposed improvements.